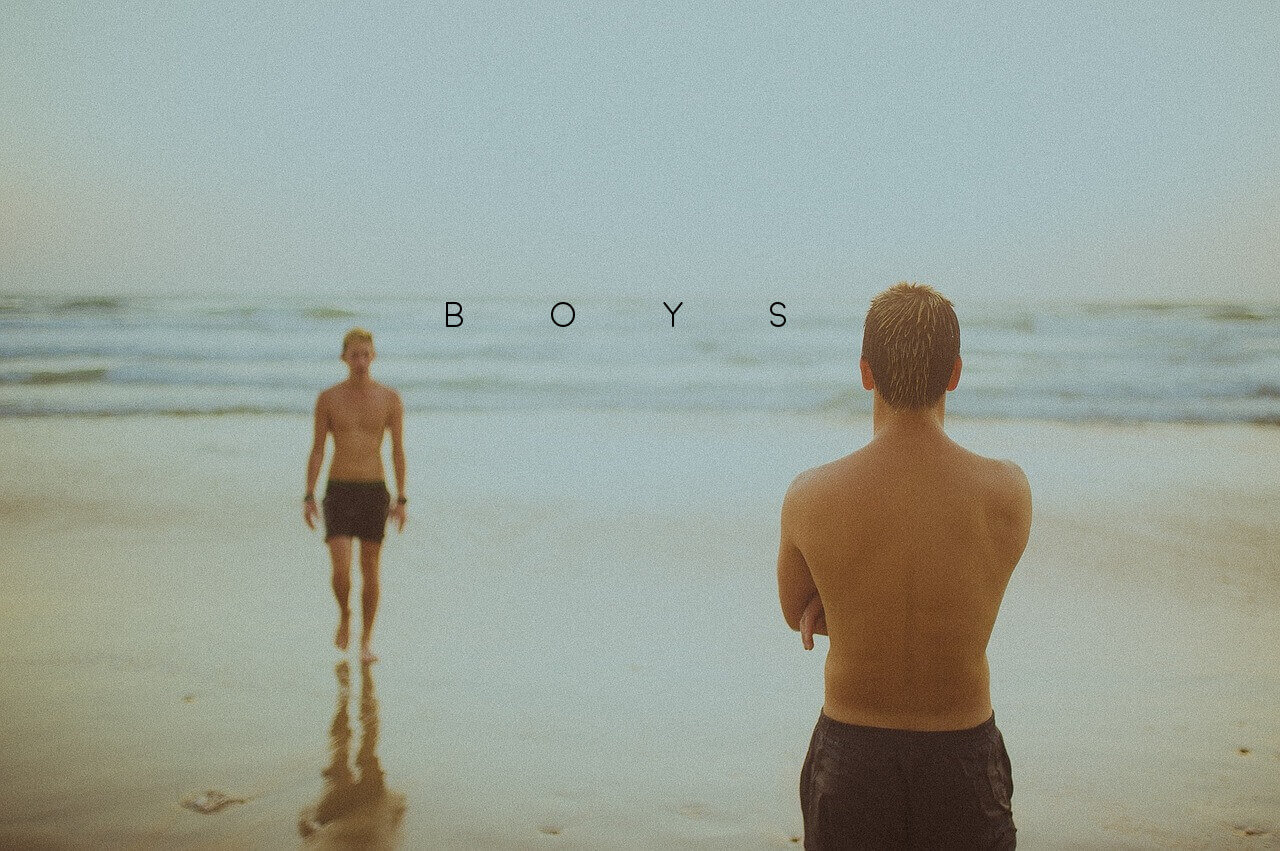 George Springer, José Altuve, and Alex Bregman sported adorable (there’s no other word for it) expressions on their face. Their cheeks were chipmunked, plump with glee, rosy and bursting with barely contained giggles. “I’m on TV!” said their bugged-out eyes. God, they were cute. It made me think back to when I saw them win the World Series.

Now I think baseball is about as exciting as being in a coma—and I know of what I speak because I’ve been in one—but, being a good Houstonian and not being a total asshole, I did tune in to the last game of the World Series, seeing that the previous games were real nail-biters and I better get in while the getting was still good. Game was great, yeah yeah whatever. But that ending.

You could tell it was coming: they were going to win. But their faces still looked as though L.A. could suddenly crack the bat on a streak of home runs and take back the lead, as had been a pattern in a couple of the previous games. So: poker faces til the bitter end. But then, an explosion of…

Joy. Pure, unadulterated exuberance. I watched as these grown men leapt into the air, their faces beaming with light. Every Astro was suddenly airborne, exhausted arms suddenly filled with tenth inning energy, strong enough to embrace every muscled teammate they could get their calloused palms on. Bear hugs, back hugs, neck hugs, bro hugs, they were all there on beautiful display. This look of utter elation on these men, who had been looking so serious just a moment earlier, their faces stoic all week as they chewed (gum, tobacco, anxiety) and/or spit (constantly) while playing against a team who almost had their better. But now? It was one of those moments you wish you could bottle because the intensity of it right then is so great, it actually obliterates your ability to form a reliable memory. And I was right there with them. Just so damn happy for what was basically group of strangers. I wasn’t a baseball fan who’d been with them the whole season, so I had none of that fan contact high, but I reveled in watching my fellow man acting like boys who just got out of school for the summer. And found out they were going to Disneyworld. With all of their best friends. As soon as they left the playground. It was thrilling to behold.

I think it’s because it’s rare. We don’t see men deliriously, stupidly, innocently filled with flat-out joyfulness. Men are programmed from a very young age that being a man, being manly, is serious business and we bear the joyless faces to prove it. It’s very much in line with our other order, Thou Shalt Not Cry, only it’s even more pervasive, more soul-stealing. Crying is an indulgence. Why so serious? It, like insanity, is a state you may or may not be aware you are trapped in. 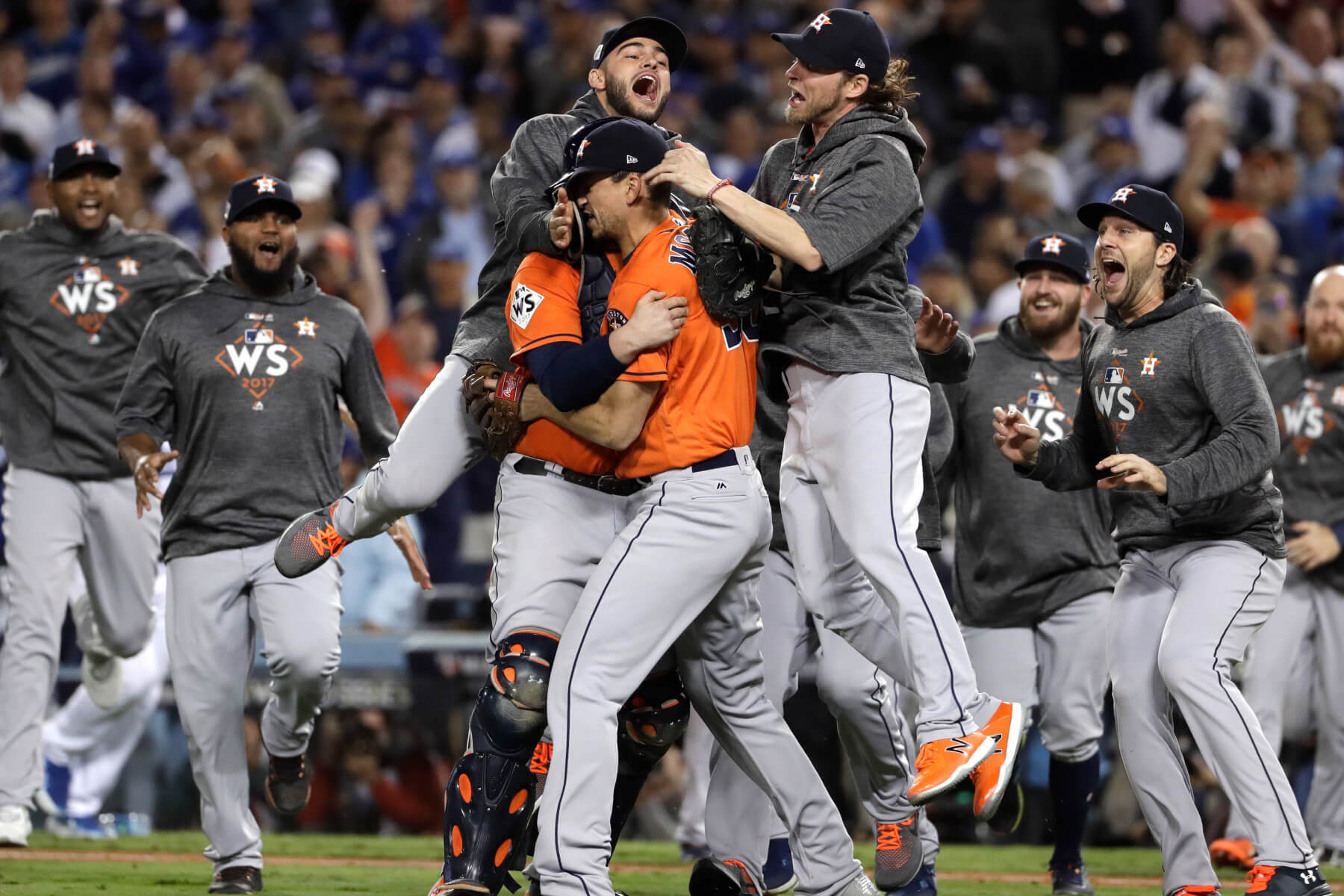 Being happy is somehow less manly. Being joyous is to let your guard down. And we know what happens when we let our guard down. The sabertooth  comes to the cave. Crops dry up. Armies arrive. Enslavement. Death. You must always be focused for danger, on the alert. There are things that will hurt you and hurt is something you cannot abide. Because there is no outlet for your hurt. You have to just stand there and take it, “like a man.”

Dutch photographer Maud Fernhout was nineteen years old when she shot twin series exploring gender stereotypes, the first one being “What Women Laugh Like.” The companion piece? “What Real Men Cry Like.” To see these images paired provokes a clash of diametrically opposed emotions. Or like trying to bring negative and positive batteries together. It’s repellant, both disheartening and disturbing. Girl finds joke hilarious and boy discovers the joke’s on him. One is all bared brilliant teeth, mouth open with a silent laugh track, eyes crinkled up from the too-bright light of humor. The other is horrible eyes, speechless lips, tear-stained skin. As the saying goes, You don’t see that every day. Truth is, you never see it.

Which is why I loved the Astros on SNL so much. Their guards were down because they couldn’t help themselves. Joy, such a small word and a gargantuan feeling, was overriding all the built-in controls. They were helpless, victims to their own pure pleasure. Tickled. That’s what they were. If not pink, definitely some hue of happy. They were so busy being distracted by their own thrill, they actually forgot to be embarrassed or polished or professional or…manly. The elfin Altuve grinned ear-to-ear while sitting on the lap of a riotously lascivious Leslie Jones. It was a deliriously happy perversion—a randy black female Santa and little kid who was definitely nice, but looked like real naughty list potential so don’t put your pen away. I thought Altuve was gonna pull a face muscle. His glee was so electric, it felt like he was sitting on my lap.

So what’s my point here? 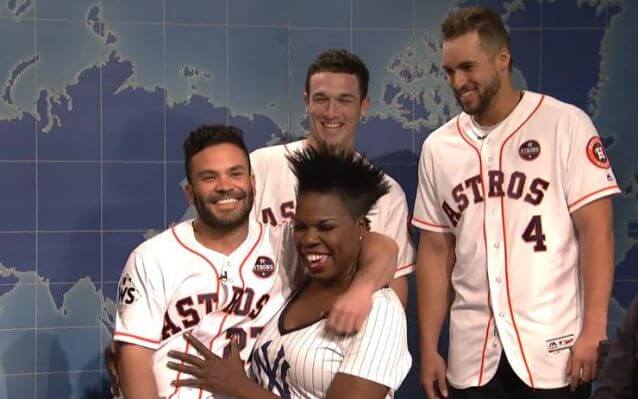 I guess I don’t have one, really. I assume it’s just a moony wish that it would happen more. That we, as men, could experience that more often. A happiness we cannot hide, a brilliant and undeniable joy. A moment where we let it all go. The crimes of men are cruel. There’s no excuse for them. But there may be a reason. Maybe we wouldn’t have so many bad traits if we were allowed to be happier more often. Because it is serious business, this being a man thing. It is omnipresent, it is overwhelming, it is constant. So much so we cower in the shadow of its weight with the speedy, reactionary retreat of an abused dog. It’s a constant harangue we are subjected to, like the buzzing or droning of a persistent ache—tooth, muscle, or heart. It never leaves us. It never lets up. There is always heat. Like an infection.

That’s why I loved this whole Astros thing. Because I got to see myself, maybe, one day, as airily elated as they were, hoping those moments would fall on me more than on just occasions so rare, I can scarcely recall a recent one. I went into my breakdown one man and emerged another. Thankful I was alive, mournful of what was dead.

We haven’t been happy since we were little boys and even then it was only for a few precious years. Happy isn’t my default. Neither is it my brothers. It’s heritage passed down. And our fathers couldn’t help it. They were just handing off the broken burden, most of them innocent they were doing so. Most of them probably just relieved their hands weren’t balled into fists. I’m sure I unwittingly passed the legacy on to my son and it pains me every time I see him, just standing there, now being a man and all that that comes with when just yesterday he was a boy with all the bliss and thrill and not-yet-dashed hope that time affords.

We are all little boys inside, really. Little boys now men. And we so want to be happy.