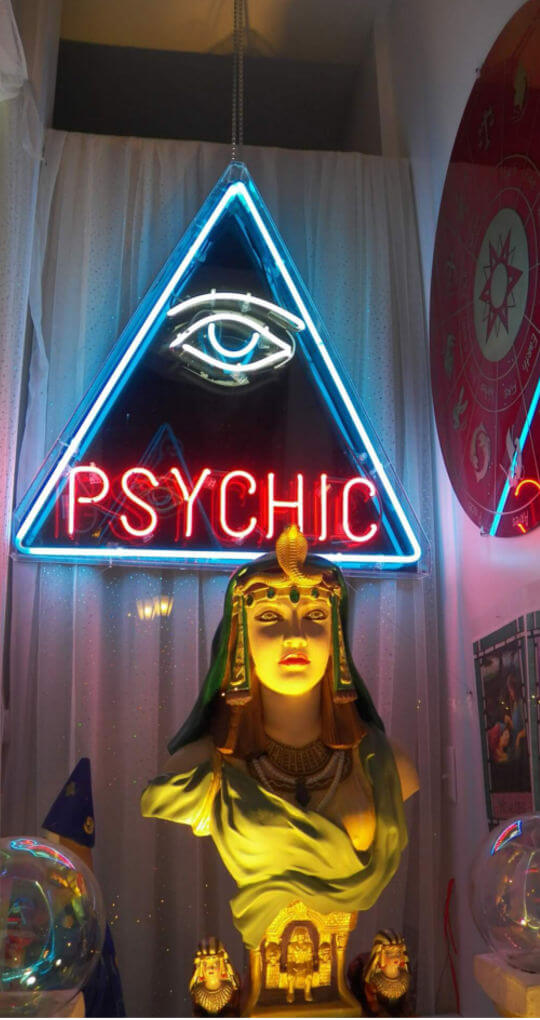 Just then, Delia came into view, standing in the hall just before the waiting room. She looked pretty, if a little ominous, the glow of what seemed like a hundred candles behind her, the wall blocking the light from coloring her cartoonishly like it was tinting Gavin. The darkness of the hall turned her eyes into dark sockets and deepened the hollow of her cheeks. The look on her face was haunting, disturbed.

Mason and Gavin looked at each other. Immediately, Delia’s posture relaxed and she threw her hands up.

“Oh for God’s sake, I’m kidding,” she admitted, walking into the waiting room. “Come on, Mason. You’re up.”

“Oh shut up,” Mason said and he stood up and walked toward Delia. “Well, how did it go?”

Mason inhaled and moved past her, walking down the red hall toward a room about halfway down. He heard the two of them talking, their voices fading out the farther he walked.

When he arrived at the doorway bisecting the hall, he saw the cause of the sound. There was a curtain of red and orange beads hanging where a door apparently was. At least the hinge sockets were still there. The beaded curtain was obscuring his full view, but through the spaces in between the long strands of colored glass, he could make out the interior of the room and the woman sitting there. The room was red, like the waiting room was, its walls covered in rich crimson tapestries. Candles were as abundant here as they were in the foyer but the room was still quite dark. All the candles were low in their wax, small wicks barely flickering flame. He could see the outline of the large woman seated in front of a small round table. The woman spoke in a thin, reedy voice, a disjunct compared to her heavy form.

Mason stuck his hands in the beaded curtain, parted the strands of glass, and slipped inside.

There was a chair at the table facing the woman and as his eyes adjusted to the dim light, he could see her much clearer. She was about twenty, maybe thirty years older than he was, and she had her hair swept up in a patterned scarf, high on top of her head, as if she was trying to tame an unruly mane. Her face was heavily made up, he could tell that even in the dark, deep rouge on her black cheeks and purple gloss on her full lips, appearing so wet and freshly applied. Her eyes were heavy-lidded but bright. She wore a blouse with large sleeves and her arms were looped in countless gold bands, each one making impressions on her skin, and Mason wondered how she was ever going to get them off. She waved one hand before her.

“Sit, sit, sit,” she said, again in triplicate, and Mason pulled out the wicker and wooden chair to obey her.

“Now,” she said, her voice gathering strength, “what can Madame Mimeaux do for you this evening? Would you like a reading like your friends?”

“Good, good, give me your fifty dollars.” She produced a bill-sized wooden box, seemingly from nowhere, and opened the hinged lid for him. Mason dug into his back pocket, pulled out his wallet and several bills from it, then placed the money in the box. She snapped the lid shut and placed the box back from wherever she produced it and smiled.

“There. Now that that’s out of the way we can begin. Give me your hands.”

She placed her hands on the table, palms upward, each one on either side of a large crystal ball, which Mason felt was a little on the hokey side. But he listened to her and did as she told him. Her hands were hot, her skin smooth and, he would find out as soon as she closed them around his, very strong.

“Should I close my eyes?” he asked her, suddenly feeling like he was about to go on one of those rides at Disneyworld but the guy at the lever forgot he was supposed to tell everyone to keep their arms inside the car at all times.

“Open, closed, it’s whatever you like. You can even look into the ball if you care to. That’s what it’s there for.”

“I thought that was for you?”

“No, no, no. That just for decoration. It makes people feel they’re getting something special. Old habits die hard. Stereotypes exist for a reason.”

Mason tilted his head, trying to get a lock on her slightly accented speech. Creole? Haitian? Jamaican? He was so white it was like he was bleached. Like most Americans he grew up schooled like America was the only country in the world, which relegated everybody else into some heap, a foreign other, a land of cultures not worth getting to know.

“But,” she said brightly, like a pop. “Whatever you do with your eyes, you need to concentrate with your mind. Do you have anything special you’d like to look for today?”

“Anyone you want to contact or know about. Or would you just like a reading, something all about you.”

“I don’t really have anyone who’s dead that I’m really needing to talk to, so I guess just the usual reading. I guess.” He felt a little at a loss. He really wanted to know if he was supposed to keep his hands inside the car or not. “What did Delia and Gavin do?”

“You’re probably in a groove, so let’s stick with that.”

“Alright then, you just relax your mind and I’m going to look at your hand first.”

She gave both his hands a good squeeze before taking one away and bringing it to the other. Then, with both hands, she began kneading the flesh of his palms. Her muscled fingers dug into his hand, rubbing as if she was trying to remove a stain on his skin. She grunted while she did so, small guttural noises from deep within her throat and rattling from her fleshy chest. After awhile, he began to wonder if part of the fifty dollars was going toward a nice hand massage and he didn’t mind it, he just wished he would have known how the split went. Finally, she began to ease up the pressure, leaned forward, and examined his right palm closely, her fingers moving along the lines etched into his skin.

“Is there…something wrong?” he asked a little more urgently than he intended.

More kneading. Then she quickly withdrew her hands.

“Sure,” he shrugged and she grabbed a deck sitting to the side of the crystal ball that Mason had not noticed before. “Is there something wrong?”

“You have a short love line.”

“Yes. Nothing to worry about,” she told him. This, of course, made him worry.

His mind started to speed up. What did that mean? Is that why he and Marayne didn’t work out? and How long is my life line?

She sorted the cards, shuffling them by haphazardly dropping one half of them into the other, not flipping them in that fffflappp! manner he associated with poker. This looked like she was about to do a card trick or something, which Mason wondered if that was, in fact, the case.