The Words (Right Out of My Mouth) Page 9

She took a swallow of her spiked lemonade. She wasn’t aware that she took a second.

How what was going to go? This conversation? Good God, what was he going to tell her? And just like that, the greatest hits started playing in her head. She’s pregnant. I have a drinking problem. I’m an addict. I’m gay. I didn’t really graduate from college, but I couldn’t bring myself to tell you the truth. The vague but horrible, I’m in trouble. The worse, I’m in some really deep shit, Mom. And, of course, the ringers: I don’t want to ever see you again. I hate you. I’ve always hated you.

She looked at his profile, searched the one-half of his face visible to her. But it gave no hint of the thoughts within. He was scaring her. But she didn’t want to react that way. So she steeled herself while forcing her voice to be almost melodic.

“How what’s going to go?” she trilled.

“This,” he said, barely nodding his head forward, as if she was supposed to look at something she refused to see. “All this.”

Where is Cain’s ribbon?

“It’ll be one of two ways. The first is: thousands of people are going to blow off the masks. They’ll stand as close to anyone as they feel like. Hand washing will go back to five seconds without soap, under the water, if at all. Then so many people will be sick, that it’s inevitable. At that point, everybody says, ‘Fuck it’ to all the preventative measures and figure if we’re going to get ill and die eventually, let’s go out with a bang.

“In a stunning show of humanity, Jeff Bezos and other billionaires realize they can’t possibly spend all their money before the end, so Jeff gets Sergey Brin on board and Sergey makes Google design a lottery app that’ll distribute trillions of dollars to average Joes all across America. Other billionaires sign on. David Geffen, however, doesn’t. Quickly, a mob storms his Malibu mansion and kills him. Every other billionaire now falls in line.”

“Stadiums are packed with either concerts or games. Beyoncé says fuck it, Billie Eilish says fuck it, Kanye says fuck it. Even money grabbers like Fleetwood Mac say fuck it and every artist puts on performances for free for the hell of it. Not all the ball teams and not all the players agree to participate, but a surprising amount do. To no one’s surprise, Tom Brady still won’t quit. Again, Google designs the distribution method for the tickets. Out of some demented sense of duty to humanity, there are actually enough support personnel to keep facilities and shows running. There are two new streamers and one entire network devoted solely to the shit actors, artists, musicians, etcetera film or record with their phones. And everybody’s buyin’ up everything. Eventually, every shelf is emptied and there’s nothing to replace the shit that was purchased or stolen because everybody who’s made the shit, from the dude who dreamt it up to the trucker who delivers the finished product and everybody in between have also said fuck it and nothing’s getting made anymore. This extravaganza wouldn’t have lasted much longer anyway because the power plant workers and the electric company employees and everybody that keeps it all happily humming along has also gone native. The news media, of course, keeps reporting because this is, after all, the story of the century. But they quickly stop covering news. Or rather, news just becomes reports from parties, weddings, mega-birthdays, and orgies. Lots and lots of orgies. Because everyone’s having sex. Even the nuns and the priests are fucking. But as soon as the lights go out, it’s just a matter of time before everybody expires drunk, high, oversexed, exhausted, and diseased.

“That’s the bright side option.”

Beads of sweat formed on their glasses. 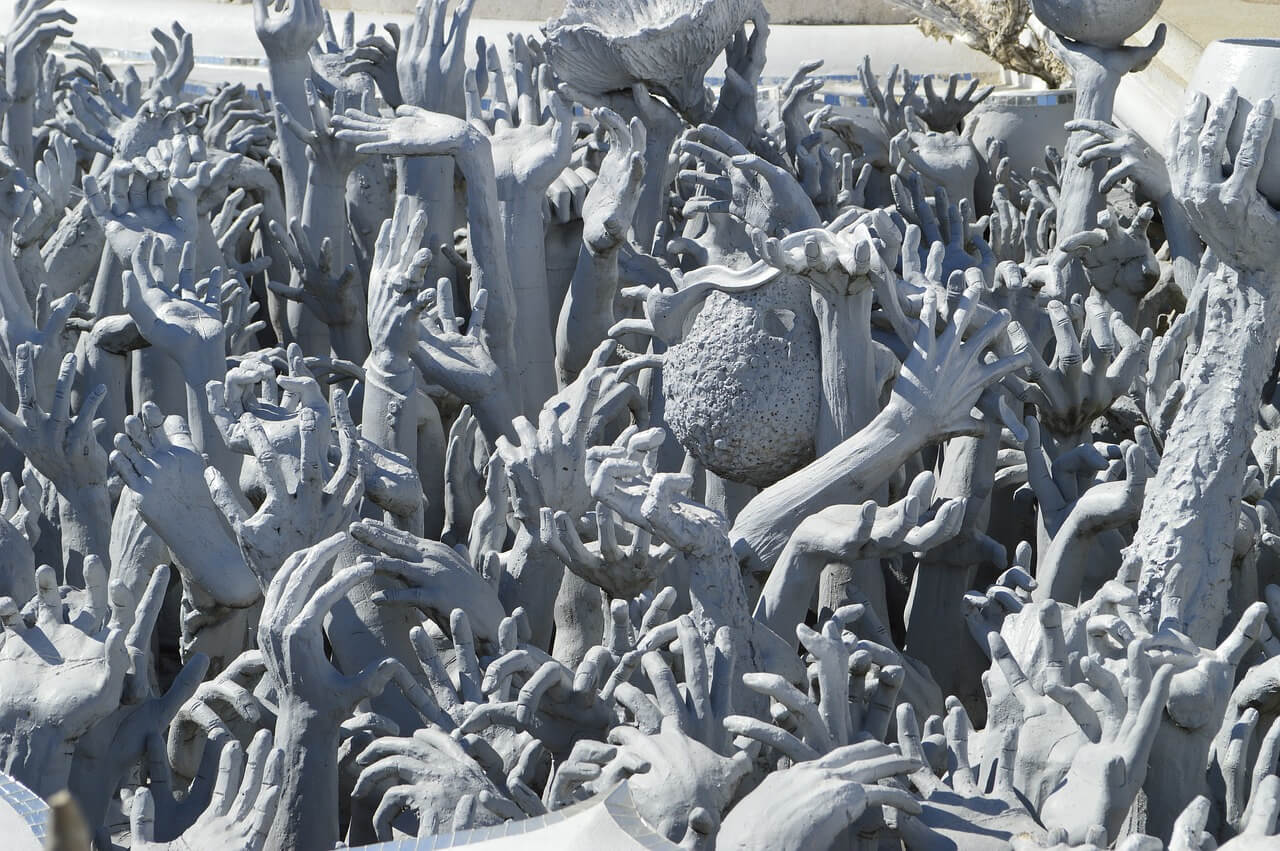 “The bad version…” Cain began. “Now I don’t have this timed out exactly, so I’m not saying the following will happen in sequence but rest assured, these things will happen.

“It’s going to be strictly by the book. We will flatten the curve. We’ll think we’ve dodged a bullet. We’ll be so relieved we didn’t all die, we’ll treat the number that died like it’s good news. Whew. Poor bastards. Glad it wasn’t us! But us is not out of the clear. We don’t know it yet, but we’ll look back on the days we’re living now and see them for what they were: a missed opportunity. We had a short window to live Scenario A, but we didn’t take it. Because everybody looks at the flattened curve and instead of thinking we’re doing the right thing, we see Open Bar or All-You-Can-Eat because, hey, less people are dying. And everybody goes back to living just like they did before March. There’s a 40/60 split of those that are following the health guidelines and the rest who don’t. Guess whose team wins? Naturally as we’re all tickling our toes in the thankfully low tide, here comes that second wave. And that’s the beginning of the end. We quickly come to the conclusion that we were beyond stupid to think the American public, the fattest, vainest, most self-centered nation in the world, could say yes to three simple guidelines that doctors and scientists say will save our lives. It’s not like we see our leader following the rules. It starts at the top and rolls on down, as if we could sink any lower. Now it’s only a matter of time before total system failure.

“Medical will be the first to go. The second wave proves to be incomprehensibly more monstrous than the first. The go-to graphic is the shot of that teeny tiny boat going total vertical up that giant wall of water from The Perfect Storm. T-shirts are made of it with the caption Ride it! and Cowabunga this, motherfucker! and Wipe Out. It’s bad enough we go around getting everybody sick. But to do that to the health care workers. That is fucking weak. Unlike the rest of us, they haven’t been sitting on their asses. They haven’t had a break since March 3. Within three months, they’re all either dead or they left the job so they wouldn’t be. There’s a handful of insane people who stay working, but eventually they either succumb to covid or die of exhaustion. Bizarre, but there are a handful of people in each hospital that survive even this. They call these people ‘anomalies.’ Seems whatever happens to them…severe stress, poor diet, exhaustion…nothing gets them sick. They’re even covid resistant. Unfortunately, they’re all doomed to suffer from ‘anomaly psychosis.’ This manifests through bizarre extremes of behavior that occur after it sinks in that they’re actually going to live through this. Because really: Who would want to? They either leave while skipping like a little girl out the hospital doors or they go total zombie, stumbling out, driven by hunger or something like it. Either way, they never come back. The government, of course, just stands there with their dick in their hand. They call in half the military but they’re walking into a hopeless situation and they’re severely outnumbered. By thousands of dead people. Every day. All they wind up doing is stacking the bodies. Why didn’t they send all the military? Because the other half had already been sent to the streets even though, again, too late.”

“The grocery stores have been cleaned out long ago. They said that the amount of food we produce would hold us for a year, but it didn’t. Sadly, the hoarders and the thieves were right. They’re going to last longer than the nice people. The ones that obeyed the rules are fucked. But it’s not that we ran out of food. Everyone from the first person to plant a seed, hatch a chicken, or birth a calf to, once again, the trucker who brought it to the store, and all the people in between, like the healthcare workers, left their post voluntarily. Or involuntarily because they died. By the time the military shows up, there’s nothing to guard. Everything in every store…and that’s everything in every store…is gone. They find a purpose eventually. For awhile. Food and merchandise weren’t the only popular items to pilfer. Guns and explosives were very hot commodities. And when people find out they can set fire to entire skyscrapers, that they burn even more spectacularly, it’s open season on every downtown. After some lackluster fighting, the military just cedes the ground to the arsonists and goes home to their families.

“Most celebrities stop all social media. Well, the ones that have gone through their stockpile do. Because now they’re just like everyone else. Screaming into the void. And the babies. And the little kids. No one will be able to process the fact that so many babies die. Tiny body after tiny body. Not of covid, but because their families have died. A few of the smart kids learn to fend for themselves, but most can’t and their deaths are more tragic because babies, they kinda go quickly, but the kids last on for weeks.

“What about the other end of the spectrum? The old people. A few brave souls go to rescue Grandpa or Grandma, but they get there too late. Every nursing home employee bolted weeks ago. Now only a fool would go to an assisted living center.

“The last funeral will be held in Cascade, Montana because that is the last manufactured coffin in the whole country. Soon the infrastructure will be so decimated by disease and people just not going to work…because who’s going to work when you can’t get paid?…cities won’t be able to keep up with the deaths. At first, they commandeer vacant lots and empty fields, but then…what are you gonna do?”

A raindrop struck the glass outside.

“Most survivors still in the cities are short-distance nomads by necessity. The smell starts to get so rank, they have to find some place where the air doesn’t reek of the dead. Rumor has it some people start using high-rises as morgues. They just put the bodies in an elevator as soon as they can and take them to the top floor and shove ‘em out. Really smart scavengers take over entire hotels. Some of those kitchens still have food in them. But eventually that realization comes to everybody else and they seek out the hotels too. When they get there, they’re treated like Mary and Joseph. No room at the inn. Those who’ve already occupied the closest Four Seasons around aren’t keen on sharing. Those that aren’t armed are quickly overtaken. Those that are, they hold out for a little while.